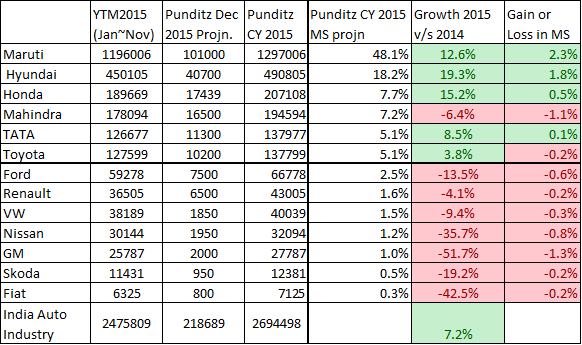 The Indian Auto Industry is estimated to grow by over 7% this Calender Year. While we’ll present the actual sales data for 2015 in Jan’16; do find our predictions we estimate for this CY OEM-wise here. The overall industry size is touted to cross 27 lakh units this year (~27.3 lakhs including luxury segment). The highlights of our analysis is:

Prologue: I landed at Bangalore airport and had an urgent meeting at Hosur Road scheduled in next 2 hours. And I get to experience the infamous Bangalore traffic and arrived at the meeting venue only after 3 hours (all thanks to major traffic junctions such as Hebbal, Manyata Tech Park, KR Puram, Marathalli, Silk Board etc). I lose a major deal and the effort of my visit to Bangalore was nullified.
The above situation is not only a reality for Bangalore, but for almost all metropolitan cities in India. While the taxi hailing apps have found tremendous acceptance, a gap is yet to be filled. Even though cabs provide the luxury of being chauffer driven and carrying luggage around; time is something that it can’t substitute.As a resident of Bangalore, I can very confidently say that ‘Two wheelers are the fastest mode of transportation in the city’. The age of Bikes being used as commercial taxi is now here. There is definitely a latent need and has yet to be realized by service providers in the sub-continent.
Bikes as Taxis are already well-accepted in Goa (driven by men called pilots) and many developing countries worldwide. Its extensive usage has been seen in highly congested cities like Jakarta in Indonesia and in many cities of Japan and Vietnam. Find here the terminologies used for bike taxis in various parts of world:
Indonesia can be cited as the most suitable where bike taxis have flourished and start-ups providing the service have grown multifold. The best example for flourishing bike taxi startup can be Go-Jek and GrabBike. Both combined already have over 80,000 registered bike taxi riders in South East Asia!
Image Source- Scooters Bangkok Nana by Khaosaming
Why Bike Taxi can work in India –
One would save over Rs.130 on a 10km travel in a Bike Taxi vis-a-vis a cab ride. PS: The Bike Taxi fares are calculated using the fares announced by recently formed Indian startup named Baxi. While similar startups are seeded in Delhi/NCR, the current Motor Vehicles Act is not encouraging similar businesses at other cities. With minor amendments in the Act, we expect the trend to catch the fancy of the Indian traveler and predict multi-fold growth in the acceptance of service.
Challenges for Bike Taxi in India:
Current Players in the market –
We at Management Punditz think that Baxi and M-Taxi have taken steps in the right direction and expect radical evolution in the way people would commute in Bike Taxis. Will they be as disruptive as Olas and Ubers? – only time will tell.

November was quite an interesting month for the Automobile Industry. While the biggies (Maruti, Hyundai, M&M etc) posted growth, Toyota, Tata, Honda, VW and Fiat experienced a drop. However, the industry grew to ~11% in Nov’15 compared to Nov’14.

We also share our concerns with the recent Chennai flood. Not only the Detroit of India has seen irrevocable damages in the past few days, the Automotive Manufacturing Plants in the area will take quite some time to recover. We pray for speedy recovery of the city and also salute the spirit of Chennai in these tough times.
A look at the Top 25 selling cars – 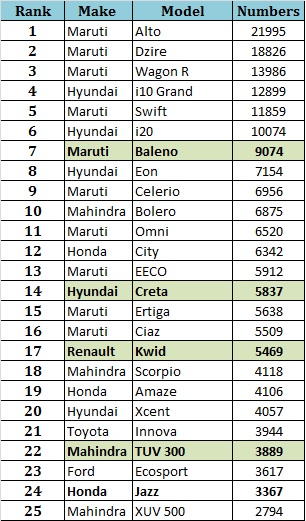 Indian market has evolved unexpectedly and OEMs are finding it difficult to plan their product portfolio citing the change in consumer mindset and difficulty in identifying the trends. We had coined the term ‘UV’ology in 2012 seeing the impressive growth of the segment and the influx of new models to cash in the phenomena (say Ertiga, Duster, Ecosport XUV etc). However, the trend slowed down in the UV’s and Indian consumers focus shifted to other segments.
The reason the Premium Hatchback segment is being analyzed is:
A look at the sales volumes of the cars in the segment in past 7 years:
Hyundai i20 remains the undisputed leader in the segment and in a way has defined the segment itself. Many players jumped into the premium hatch space, but were unable to catch the fancy of the Indian Buyer – Jazz & Punto saw initial positive response, however couldn’t gain the expected volumes. While the previous generation Jazz was discontinued in July 2013, even Punto faced issues crossing the >500 sales mark.
Snapshot of major updates in the segment:
We expect the segment to deliver similar growth in coming time and do not be surprised to see other OEMs jump in this bandwagon. Baleno & Jazz again have a lot riding on their shoulders to define their respective OEMs performance in India.
Management Punditz has been consistently studying the Indian Automotive Market and are pleasantly surprised by the complexity seen in the past few years. India is termed a sub-continent for a reason – its size, population, variety, culture  and demographics is multifaceted. Though we have been analyzing the car sales data for the entire country, we start our regional study with this post by reviewing the Top 10 cars sold in the Top 10 cities of South India. We had a specific reason to start with South India –
We have prepared a trend-wise chart (2012 to YTD 2015) of the Top 10 selling Brands to extract a clear picture. The sales data is presented by highlighting the All India Sales and then divided to South with further division to the respective states and later cities. Let’s see the statistics –
ALL INDIA

Points to Note (considering 2015 YTD numbers):
Oct’15 Top 10 statistics is also interesting for many markets:
No wonder many new OEMs entering the Indian market are finding it difficult to decode the success mantra! Do note that only Maruti has been able to consistently perform in ALL markets and is hence the Market Leader.