Source: http://www.team-bhp.com/forum/indian-car-scene/94582-december-2010-indian-car-sales-figures.html
Here Truck refers to goods carriers which are having GVW >5T 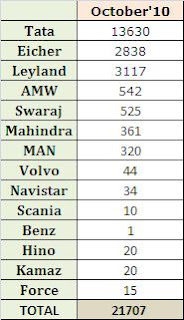 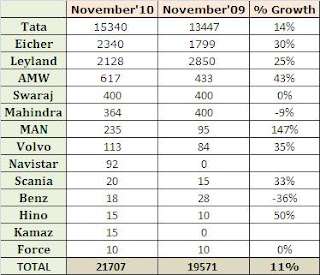 November was full of surprises for the Indian Auto Industry. While a drop was always expected in the sales numbers, the drastic fall has raised several questions. This shows how Automobile Dealers are skeptical in filling up their stocks for December. The trend has been that the Retail in December is low – as the vehicles being purchased during this time will have lower Re-sale value. Hence, we can expect a slew of discounts being by OEM’s to boost sales at this period of the year.
Some inferences:
Source: http://www.team-bhp.com/forum/indian-car-scene/93000-november-2010-indian-car-sales-figures.html
October 2010 Sales Figures – Pan India

This has been a great month for Automobile manufacturers. With festival season around (Dussehra & Diwali), there is expectation of surge in demand.
Alto has proved again that it is here to stay at the top spot for long and K10 sales has just added to the celebrations!! The tallboy Wagon-R proves again that practicality is what the Indians want. The i10 again heralds the flag for Hyundai and the refreshed version stands to its name. Aria has done pretty decent numbers in its opening month. Fabia’s sales have increased three fold – now that’s fab !!Swift has proved again as an undisputed leader in the hatchback category. The cheapest Ford in the world – Figo is also consistently performing well. Cruze has cruised a long way to ward off competition from Civic and Corolla.
Fortuner seems to change the fortune of Toyota in the premium SUV space (the car has already a waiting period of six months and still seems to increase more in near future!!). Innova has always proved to be a Innovative winner in the MUV space and still stands a difficult nut to crack for Aria. Scorpio is one product that has evolved as a category of its own and stands no competition. Bolero presents an excellent case to display how an entry level SUV can overcome the sales numbers of a hatch (Bolero has sold more than Figo!!) and thus stands to be the best product for Mahindra. City vents out the competition from Vento and is still doing good numbers.
Source: All thanks to the guys in Team-BHP for the figures. For a much in-depth overview please click on the link – http://www.team-bhp.com/forum/indian-car-scene/91499-october-2010-indian-car-sales-figures.html
P.S. : The sales numbers indicated here are not Retail volumes (i.e Dealer to customer) but are Wholesale figures (manufacturer to dealer)
September Sales Figures – Pan India