What is it that makes the segment all that lucrative?

Indian Luxury Car Sales has performed in a time when the Auto Industry was reeling with lower demand and declining sales. The downturn had its impact on all segments of the industry except the luxury space. Name a OEM that manufactures luxury cars and you’ll find one in India. Until fifteen years back the only name familiar in the segment was Mercedes. It enjoyed ubiquitous status in the space and was undeterred till the German counterparts arrived. This later led to the rapid influx of almost all luxury OEM’s in the Indian market.

The reason was pretty obvious – 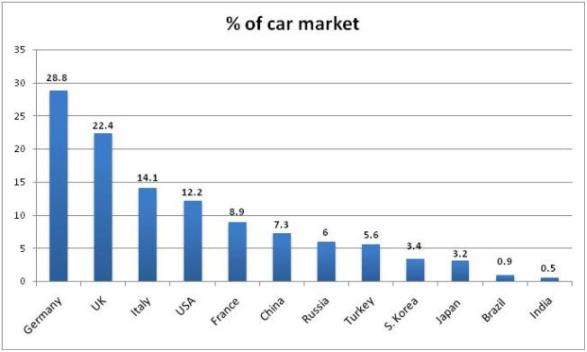 As seen, India’s luxury car sales contribute only to 0.5% of overall automotive sales. This leaves a huge untapped portion of the market which needs to be leveraged. The volume of the market is nearly 19000 cars/year which is bound to grow by 30-35% and is expected to reach 24k cars in FY 12. The market is currently dominated by German Automakers Mercedes-Benz, BMW & Audi. Lets have a look on their volumes in past 3 years –

BMW was successful in continuously overtaking Mercedes-Benz as the top luxury car maker. The growth has led the OEMs to think very aggressively to improve their stand; For Ex: BMW launching ‘India Specific’ strategies – pricing the 3 series and X1 under 24 Lakhs (for corporate edition). BMW was also focussed in increasing their outlets across the nation.
Similarly, Volvo India also launched a similar initiative of lowering its prices for the entry-level S60 sedan. Their outlet strength still remains a concern with only 7 outlets in the country. The OEM is focusing to double the same by F13.

It is amazing to analyze how the customer profile has changed. Be it the real-estate boom or the growing number of entrepreneurs, purchase of luxury cars remains the symbol of Power, Recognition, Independence & Status. A local farmer from Kolhapur is purchasing a Merc, a beedi factory owner from Raipur is buying a BMW, young IT professional from Pune is owning an Audi, young inherited industrialist from Delhi is driving a Ferrari – one can see the variance in the customer profile and also their similar inclination towards luxury cars. The emergence of the rural India has again increased the market for these cars – who had expected Mercedes-Benz to sell 113 Mercs at Aurangabad & 180 Mercs at Kolhapur in one shot!

A view on the segments and the players –
Sedans: 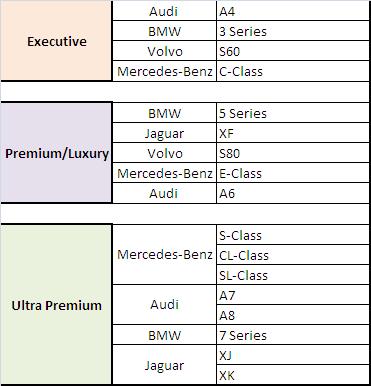 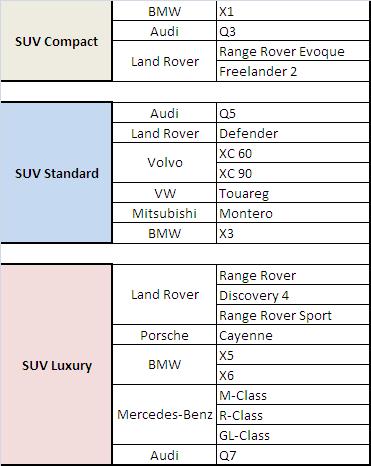 The above list is bound to increase and so does its sales.  The attractive financing schemes has also attracted the luxury C-segment car buyers to jump to this segment (Currently BMW is offering its X1 at an EMI of Rs. 15,999!). Second hand car market (used car business) will also grow – Merc & BMW have already jumped into the bandwagon assessing its potential.

With F1 coming in, the craze has put the nation on its toes. The love for luxury cars had raised to the next level. It will be interesting to see how the coming years shape this segment of the market.