Skip to main content
India has proven to be a frugal hub for Automobile OEM’s due to its location and skill advantage. India is a now a part of the global strategy for these OEM’s; every company is planning to set up their manufacturing base in the country and are also exploiting its option as an export hub. Indian Auto Industry stands second in Two Wheeler sales, third in Small Cars sales & fifth in Commercial Vehicle Sales. These figures are bound to move towards the numero uno position in the coming years. No doubt India is now the Investment Hot Spot for these Auto Majors. PSA Peugeot Citroen has even made its second entry after leaving its operations in the 90’s. Almost all cos. are planning to double their production capacities with the intention to stay competitive in lieu of increasing demand. But at the same time volatile market conditions & unstable government policies are making these OEM’s reconsider their plans. And Gujarat has emerged as the blue-eyed state for all major investments and seems to overtake Chennai(TN)/Pune(Maharashtra) as automobile hub.

The investments are upto a tune of over 40000 crores in the next 4 years. The list is never-ending and looks like – 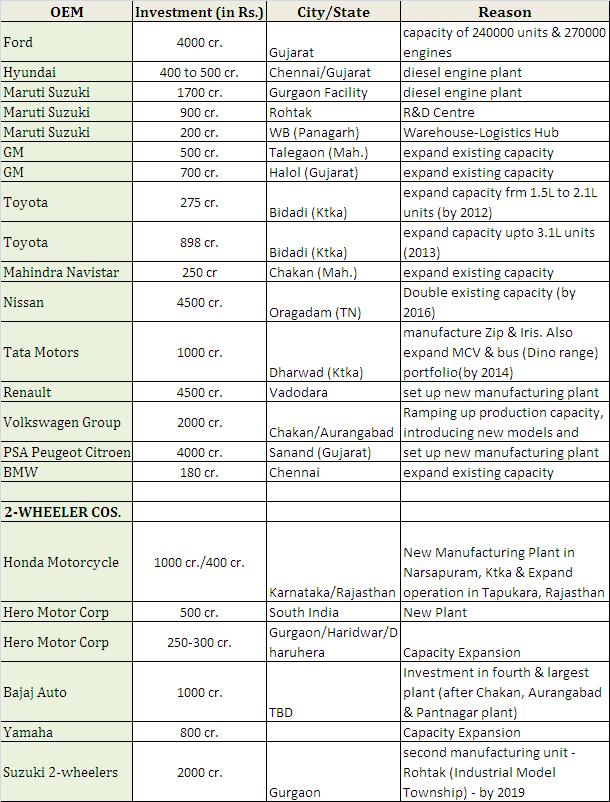 The plans is to enhance the production capacity to the level of 40 Lakh passenger vehicles. Setting up multiple manufacturing bases is also a part of the location strategy, where the OEM is not completely dependent in terms of manpower/taxes/proximity. The recent labor turmoil in Maruti had literally shut down its overall operations and the damages stood irreplaceable. Even when Maharashtra Govt. lifted its tax benefit, companies such as M&M, VW started looking out for other states as investment options. Gujarat, however due to its Investment friendly policies and low corruption emerged as the darling of OEM’s. It would not be an exaggeration to term Tata’s shifting its Nano plant to Sanand in an OVERNIGHT. Now companies such as Maruti, Peugeot, Hyundai, Renault/Ford have all approached the state for their Expansion drive. 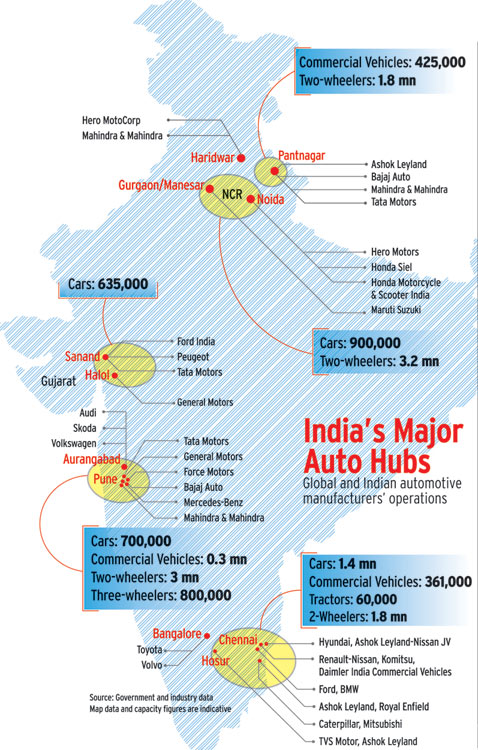