Just the other day I was waiting at a busy signal in Bangalore, which in rush hours is a real nightmare and gives you ample time to reflect upon different facets of life. This is when I noticed a rusty, old yet well maintained Bajaj Chetak waiting next to me and right next to me was this pure black Pulsar 150. The ages of the riders determined the path which Bajaj Auto had taken in its 60 odd years of journey. One was an icon which lay the foundation for the most profitable company in the world (in 2012) and the other gave Bajaj the much needed push in redefining performance motorcycling to the 1 billion population of this country. But like any company, Bajaj also survives on numbers and with a 3.2% YoY degrowth, am sure all in not well in the Akurdi HQ of World’s 3rd largest 2 wheeler manufacturer.

The late 1990s saw the popularity of scooters wane and motorcycles emerge as the new favorites in the Indian two-wheeler market. It was believed that the dramatic shift happened because players like BAL did not pay sufficient attention to design, R&D, and customer satisfaction. But why would they? With waiting periods for scooters upto a few months, it was a very comfortable position for BAL. By the end of FY 2000, the numbers clearly indicated that consumer preference had shifted firmly toward motorcycles with four-stroke engines, and industry watchers predicted that this trend would continue. Geared scooter sales registered a fall of 41% in 2001. “The market has shifted to motorcycles. We will have to follow the trend,”said Venu Srinivasan, chairman, TVS.
BAL realized, though rather belatedly, that it would have to cater to the changing consumer tastes and preferences, if it had to survive. Rajiv, who later agreed that BAL had been slow in reading the demand pattern, said, “See, the company failed to anticipate the consumer behaviour”. In January 2006, BAL announced that it had stopped production of the Chetak. With this announcement, BAL closed a major chapter in its history. Rajiv said, “It is a history I would like to forget. My company has lived too long on nostalgia…holding on to anything from the past is a sign of weakness.”… This was a reather strong statement to make at a time when the Kawasaki-Bajaj alliance bikes were doing decently but nowhere close to those from the Hero Honda (now Hero Moto Corp) stable. The Splendor was making BAL’s life really tough with every passing day.
BAL did a brave thing (and believed to be a foolish thing at that point) by launching the Pulsar 180. Developed and designed in India, this was a true blue performance machine which could be bought by the common man in India. Suddenly power and torque replaced “kitna deti hai..” and Pulsar was all set to write a chapter in 2 wheeler history. With the launch of its twin brother Pulsar 150, these 2 motorcycles completely redefined performance motorcycling in India and became the most sougt after bike in India amongst the youth.
Bajaj celebrated 10 years of Pulsar in 2011 and they were leaders. But as the ad said “ 10 years is a long time” and the likes of Yamaha and Suzuki were not going to keep quiet. The FZ and the Gixxer (both excellent motorcycles) again created trouble in paradise and Pulsar’s diminishing market share started pinching bajaj. Along with this the instability of the discover range, with new models being launched every 2 months created confusion in the minds of the consumer who ended up shifting to Honda Shine or the Hero Passion.

Now BAL has breathed life into the Pulsar with the 200SS and the AS range. But I believe its time to pull up the socks and get a Pulsar V2 which will again redefine the Indian 2 wheeler market. Else one fine day Pulsar will be like the rubber band stretched too far, either it will break and give away or it will stretch beyond a point of no return. Also, can Bajaj consider re-entering the scooter segment and launch a breakthrough offering in the segment ?(similarly to what Pulsar did in performance bikes). So what’s your game Bajaj?

(Author’s Profile:  Manu Sasidharan. Am a hardcore petrol head, an auto enthusiast and an amateur designer. I have been in close touch with the industry for a long time and am abreast with the action in the automotive sphere. Driving is my passion and combined with a love for travelling makes me a nomad by nature. On the education front, I have done my Engg in Electrical and Electronics from Cochin university and my Management studies from Symbiosis Pune.) 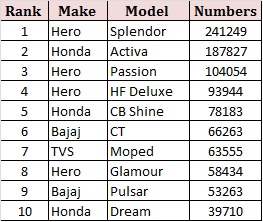 May 2015 was a slow month for the Indian Auto Industry and the increased fuel prices had a negative impact on the consumer sentiments as well. 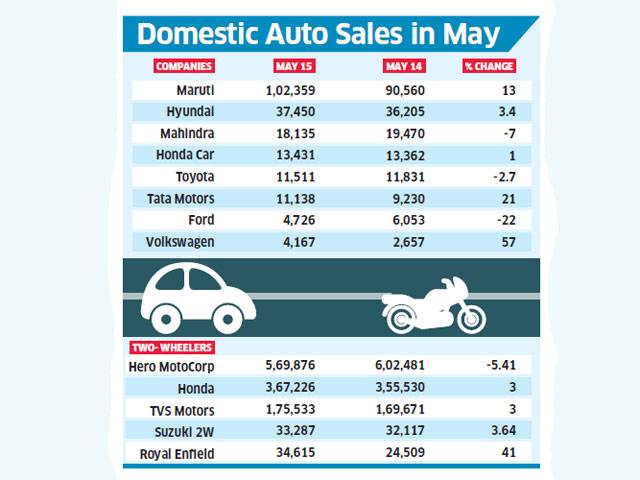 The new launches in May’15 primarily were Tata Nano GenX and updated Mahindra XUV 500 which fueled the volumes for both the respective brands. Dispatches for Celerio Diesel also started last month. However, we have some big ticket launches apart from Celerio Diesel scheduled in June & July – S Cross from Maruti (will add the portfolio in Maruti’s premium dealer brand named Nexa), Honda Jazz, VW Vento facelift, etc. 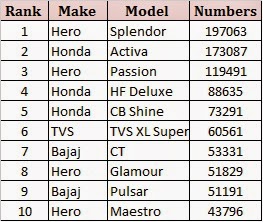 April has been a slow yet positive start for the financial year. The top 5 OEM’s experienced growth in YoY sales and emanates the confidence the industry can offer in coming times. As always even this growth was not an easy affair and the companies had to strive hard to project growth from the lower base they had set for last year. The top gainers and losers for different automobile sectors looked like this:

Do note in the above table that M&M regained its 3rd position in the table and even Toyota overtook Honda sales by quite a margin! The brand wise statistics for all OEM’s is as mentioned:

Maruti: It is a happy moment for the industry when Maruti crosses 1 Lakh sales figure for any particular month. It automatically states the optimism in the market and instates confidence accordingly. Again the torchbearers for Maruti were the Big 4 – Alto, Swift, Dzire and Wagon R which collectively sold whopping 72,163 units (almost 73% of Maruti Suzuki’s sale!!!). I’m always amused by the numbers brands such as Omni & Eeco garner (it is actually more than the popular Celerio!). I sometimes wonder why there is no competition product for either Omni or Eeco. Celerio is stabilized at 5-5.5k units and we hope the numbers to surge post the launch of Diesel variant this month. Ritz is busy finding takers in taxi segment these days and it’ll be crucial how the overall market responds to the carline. Ciaz is striving hard to ponder near 5k figures and is doing good currently in its attempt.
Hyundai: The Korean Automaker is indeed in Elite form 🙂 Elite i20 is confidently progressing towards matching Swift numbers and marks >12k figures for second time in a row! The capable premium hatchback is turning the fortunes of the Korean major and we are now waiting if the OEM can launch a sedan variant as well. Hyundai is leaving no stone unturned to revive i10 sales has been able to shape up well – grows impressive 24% YoY. Grand i10 performs as expected and adds >8.7k units to overall business. Xcent also touches 4.6k units after a lot of push – and it surpasses Honda’s Amaze sales in Apr’15 (only 2862 units of Amaze sold). The 4s Verna still finds it tough to challenge the 2 C’s (City & Ciaz). Elantra sales move up due to its silent refresh launch.
M&M: Though the Indian SUV major grew by a nimble 1% YoY – it easily overtook the no.3 challenger Honda comfortably. Again the Trimurti were the saviors for the Indian OEM (Bolero, Scorpio & XUV 500 which contributed to Mahindra’s 93% of overall sales!). It is difficult to understand the fate of capable yet somehow incomplete brands such as Verito, Xylo, Vibe & Quanto. Rexton also finds itself in a tough spot month on month and is way behind the segment leader Fortuner.
Toyota: We appreciate the way Toyota has been able to gain volumes for Etios and Liva over the past few months. YoY Liva has grown 83% and Etios by 32% – it has gained profound acceptance in taxi market and has been able to leverage the brand equity gained through its sibling Innova. Etios & Liva twins are bringing significant volumes to Toyota and see the strategy paying well to the Japanese OEM. Fortuner proves to be a dependable workhorse again brings >5k units sale as usual. Camry crosses 100 units for the first time! Corolla numbers were equally impressive as well and is easily the segment leader in Indian market.
Honda: We have been trying to understand the variance Honda offers in its figures every month but are unable to identify. Last 5 months statistics for your reference – Dec’14: 14428 units, Jan’15: 18324 units, Feb’15: 16896 units, Mar’15: 22696 units & Apr’15: 12636 units. Amaze does below 3k units for the second since its launch (only the first month it had done 2552 nos). Mobilio too posts its all time low offtake of 689 units and poses serious questions on its market acceptance. City anyhow continues its stellar performance and adds the required volumes to the overall numbers.
Tata: Who would have predicted that the newbies Zest & Bolt would do less than Indigo & Indica. The Bolt figures are scaring low (633 units). Nano does below 2k units – affect of GenX Nano launch scheduled for May? Safari posts its worst offtake in past 4 years and could manage only 184 units in Apr’15 – again the facelift launch on cards affecting the sales? Venture does negligible numbers again.
VW: We somehow feel that the Elite i20 sales have triggered interest among buyers to consider Polo and the brand has seen an upward trend post launch of the Elite. It is however, much better in value than the Hyundai counterpart is thus getting buyers.
Nissan/Datsun: The Go & Go+ cousins finally manage to get >1k units offtake together. The brands have not seen the success it assumed, however is trying hard to find momentum. Terrano is doing below average and could do much better.
Renault: Lodgy posts 2032 units on the first month of its launch! It fits exactly between Ertiga & Innova – an intelligent space to be in. However only the coming months would be crucial to term the carline a success or a failure. Duster numbers see a dip – more focus on Lodgy in Apr’15?