Skip to main content
August marked the beginning of the festivities with Janmashtmi and Ganesha Chaturthi – but was the fervor around the auto industry as well? To a certain extent yes. While the biggies (say Maruti & Hyundai) witnessed YoY growth, homegrown MNC’s Mahindra & Tata continued to take the hit. August saw a spurt in terms of big launches – the ‘Zest’, Punto ‘Evo’ & i20 ‘Elite’ saw life in the month. The new launches are very promising and crucial for their respective OE’s to cash in the festive demand and make a mark in their respective segments.
The biggest launch of the season has to be the ‘Zest’ – in short Tata Motors’ future lies in this critical launch. Tata have tried all the formula’s to make this product a success – like revamping dealer facility, assuring 3+3+3 (free 3 years warranty + 3 yrs maintenance + 3 yrs Roadside Assistance), load it with plethora of features (like cheapest diesel automatic?) and price it attractive. The latest news announces 10k bookings already garnered by the carline. Can the buzz grow and sustain to the required levels? – the product does have the potential.
Similarly ‘Elite’ i20 promises to offer the best-in-class features and unseen luxury for the segment. Hyundai’s New Product Development has been envious for sure! The Elite scores in all parameters – right from looks to driveability, from comfort to features that no other car in the segment or even in the higher segment can boast of. The challenge for Hyundai would still remain on maintaining its focus on its ENTIRE portfolio and avoid cannibalization. Grand has already eaten into i10’s market share (i10 which was averaging at around 6k units per month has dropped to 2.5k units/mth!) and lets hope elite does not shudder grand’s/Xcent’s/Verna’s pie. Verna by itself is facing stiff competition from the segment leader City and sees tougher challenge from Ciaz. Can Ciaz make the race more interesting? – lets wait for Sep’14 numbers for that.
Maruti continues to deliver stupendously on ALL its carlines. Alto pleasantly jumps back to the 20k+ mark and the trend is positive for its siblings Wagon R, Ritz, Swift & Dzire as well. These 4 cars proudly continue to rule in the Top 5 charts yet again. Celerio has somewhat managed to fill the gap of Estilo & A-star – I somehow am not impressed with the volumes the brand is able to garner. It is a tough push for Ertiga – and it hovers around 4.5k units. SX4 offtake diminishes basis the upcoming ‘Ciaz’ launch. Maruti happily milks the Omni, Eeco & Gypsy brands – see the offtake numbers and be surprised 🙂
Honda lives its dream run and that too with style! The Jap OEM has already overtaken M&M in July’14 as the third biggest Passenger car OEM and easily achieves the feat in Aug’14 as well. It leaves no space for M&M to regain its spot. However, the production constraint has left the OEM blue-faced – 757 shipments of the new Honda City is just not fair! We have observed irregular production schedule for the carmaker and is not positive in long run.
Mobilio manages to meet our expectation and offtake of 5530 units is exemplary. Honda has to focus on rapidly increasing its production as per the demand to meet customer expectations and pose a real challenge to its Korean counterpart (Hyundai).
Ford achieves the feat of sales of over 1Lakh Ecosport in just within 14 months! However, only 60% of the sales were in the Indian market – an Irony how the car which was Made for India and Made in India is NOT made readily available in India. Ford really needs to learn from Honda in terms of taking the plunge and giving the Indian market the importance it deserves. No longer an Ecosport customer would wait for the car – rather he’ll opt out for a City or a Elite i20 or even a Mobilio.
M&M needs some serious introspection currently – with the petrol prices dropping and diesel increasing the Indian major is facing some real threat from the market conditions. It’s rural stronghold is now being challenged by the new entrants (see the rapid expansion drive of the Renault’s & the Ford’s). Its marque Bolero has not touched the 10k mark for 5 months in a row now! Scorpio sees a sudden fall in numbers – facelift expected shortly? Verito, Vibe, Quanto are in the extinction mode. Rexton faces tougher avenues in lieu of the Fortuner & Santa Fe. Xylo still pushes itself around.
The Datsun couldn’t leverage on the India story – cannot see any reason why the brand should not perform! It made a breakthrough entry but not sustain! The OEM needs to be aggressive in front of the Maruti’s and the Hyundai’s or else it wont survive. Terrano settles at 1.5k average and manages itself to gain on the Duster hype. The ‘new’ Sunny could not revive the brand and still faces anonymity in the segment.
The ‘new’ Polo gains momentum and the brand touches the 2.8k mark after 11 months. The capable hatchback still faces challenge bcoz of its pricing and low dealer network. Can the facelift lift the brand? Only time will tell. 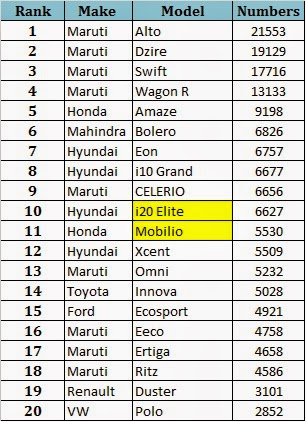 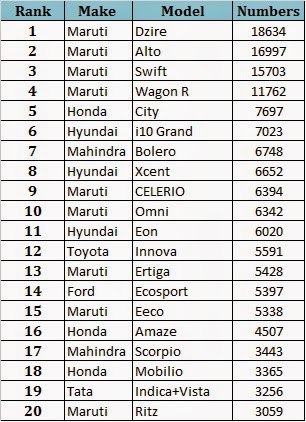 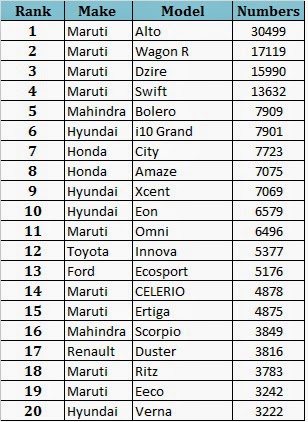