Skip to main content
Management Punditz has been consistently studying the Indian Automotive Market and are pleasantly surprised by the complexity seen in the past few years. India is termed a sub-continent for a reason – its size, population, variety, culture  and demographics is multifaceted. Though we have been analyzing the car sales data for the entire country, we start our regional study with this post by reviewing the Top 10 cars sold in the Top 10 cities of South India. We had a specific reason to start with South India –
We have prepared a trend-wise chart (2012 to YTD 2015) of the Top 10 selling Brands to extract a clear picture. The sales data is presented by highlighting the All India Sales and then divided to South with further division to the respective states and later cities. Let’s see the statistics –
ALL INDIA

Points to Note (considering 2015 YTD numbers):
Oct’15 Top 10 statistics is also interesting for many markets:
No wonder many new OEMs entering the Indian market are finding it difficult to decode the success mantra! Do note that only Maruti has been able to consistently perform in ALL markets and is hence the Market Leader.
October proved to be the blockbuster month that the industry was waiting for a veryyyy long time! Indian Auto Industry (Passenger Cars) proudly posted a double digit growth of over 20% and saw the likes of Maruti Suzuki, Hyundai delivering their all time highest performances respectively. Apart from Toyota, VW & GM; all other OEMs registered a YoY growth in October. (Trivia to be noted – Toyota, VW & GM are infact the top 3 car makers worldwide and are not doing that well in the subcontinent!). Let’s look how these OEMs fared –

Festive demand was clearly evident and the aforementioned data also includes dispatches to dealers anticipating the Diwali rush as well. The new launches also supported the excitement and bought in higher enquiries to the respective showrooms. Gamechanger products were launched in Oct’15 – Baleno for Nexa and Trailblazer for GM. Though Baleno would be instrumental for Nexa outlets to jump in the volumes race; Trailblazer has a hectic task of reviving Chevy’s brand perception in India. Also to note the volumes of the most potent competition Alto ever had – Kwid. Let’s look on the model-wise numbers:

— Dzire continues its dream run and crossed 20k figure for the third time in past 5 months! We have never seen a brand grow such rapidly at this stage of product cycle. Dzire is surely desired quite highly by Indian consumers and is breaking sales records consistently. With this pace, it would in meantime dethrone Alto from the top slot. Also to be noted is Eeco’s performance – which crosses 6k units after 36 months! We still wonder where these many Eeco’s go? Swift and Ritz deliver as usual. More important is the volumes Maruti is gaining through NEXA – S-Cross & Baleno together post 7246 nos offtake. With mere 100 outlets, 7246 units is very respectable and its contribution to parent company volumes is admirable as well. Seeing Baleno’s response and Maruti’s hold on the market; we expect the numbers to go even stronger in future.
— Hyundai is leaving no stone unturned to improve its market share in India and now has the right set of products infused in almost ALL segments. Eon & i10(entry-level hatchback), Grand i10 (hatchback), Elite i20 (premium hatchback), Xcent (Compact Sedan), Verna (C-segment Sedan), Elantra (D-segment sedan), Creta (Crossover SUV), Santa Fe (premium SUV). Only MUV is not being catered to currently. Grand i10 crosses 14k mark for the first time and and stands only 3.5k units short of the segment leader Swift!
— Mahindra makes a strong comeback into the third position. TUV300 maintains its 4.5k mark and contributes decently to the Indian SUV major. Happy to see Bolero cross 7k figures after 4 months – it is imperative for M&M to inhibit cannibalization of Bolero from TUV and vice-versa. XUV 5 double ohh also joins the party by having its best offtake performance of past 35 months!
— Honda impresses with YoY growth (52.29%), however loses its third position to Mahindra. City & Amaze makes into the top 10 selling cars list. Jazz now seems to stabilize at ~4.5k units and we expect similar volumes ahead as well.
— Ford crosses 10k mark for the first time after Sep’2013! Ford now has the right arsenal in its army and its time for it to conquer its territory. 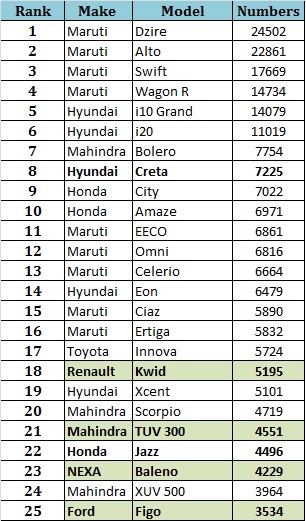 While Toyota experienced a slight de-growth it was able to dethrone VW from the top slot that the European major had gained during first 6 months of the year. VW Scandal has hit the car maker real bad and it seems impossible for the carmaker to regain the position back. However, the top 3 stand close to each other even now and even the slightest change in big markets can benefit the respective OEM. To analyse the top international markets, lets us assess the volumes accordingly:

China still manages as the Biggest Car market in the world and is clearly ahead of US. Also to note is that India has the second best YoY growth (after EU+EFTA) and makes it an important destination for car makers. We wouldn’t be surprised to see India overtake Japan in overall sales within next 3 years. But the gap to cover by the Indian market seems phenomenal (Chinese market is still six times bigger than that of the sub-continent). Also the Indian market is stunted with single digit growth for quite some time now. We expect the 2016 Auto Expo the change the course and the focus in bringing updated products will help the industry gain a strong leap forward.

Management Punditz yet strives to diversify the Sales Data availability for the automobile industry. In the aforementioned endeavor, we present the September 2015 Offtake data (sale from OEM to dealership) for Commercial Vehicles and categorized in M&HCVs and LCVs. Each category has been sub-divided to Passenger segment & Load Carrier Segment for clarity. 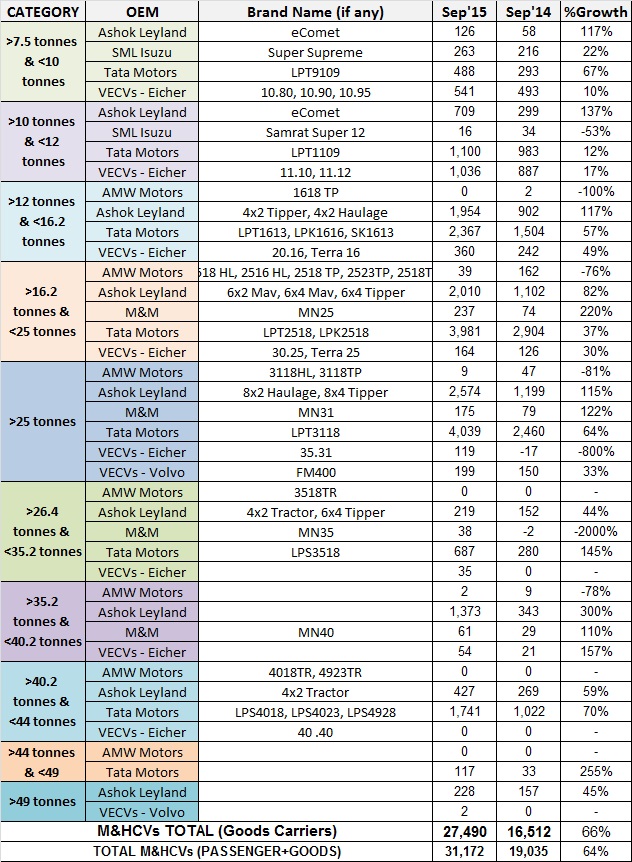 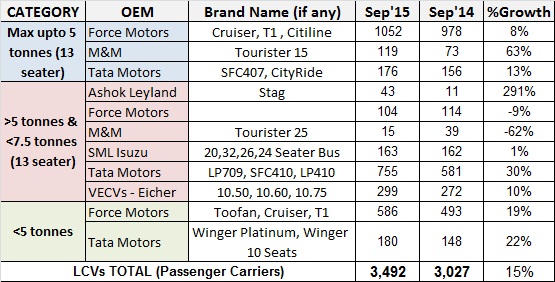 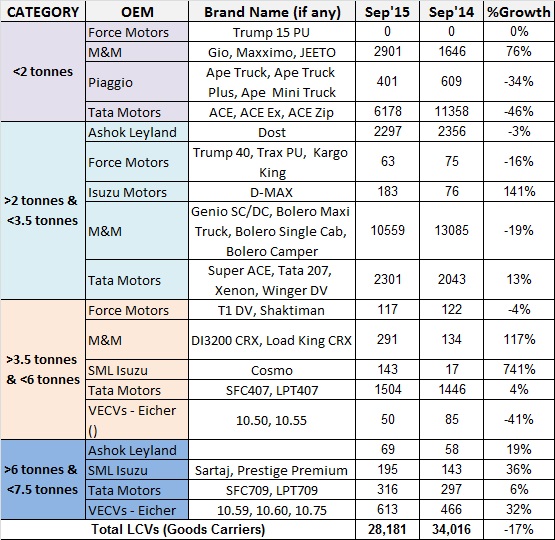