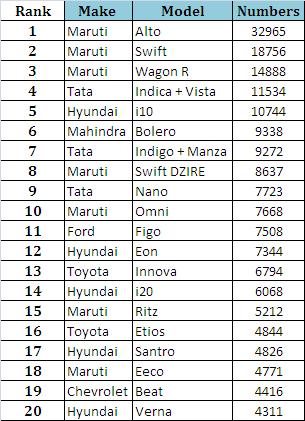 Highlights –
December has been a breather for the Indian Auto Industry where many of the OEM’s saw a marginal growth over last year. December has always been a tricky month – as majority of the customers postpone their purchase decision to avoid losing out on re-sale when the year of manufacture comes into consideration. On the other side aggressive discounts by OEM’s are used as a catalyst to pull customers. Also most dealers are on the ramp for clearing their ‘old’ stocks. Other whip that the manufacturers use is the news of increase in prices from January.
In totality December gave a reason to rejoice to Hyundai, Tata & Mahindra who saw a growth of 12.8%, 46.79% & 23.97% YoY respectively. While the country’s biggest automaker is still ailing with its decline in sales, hopes are still on its revival with interesting products such as Ertiga in pipeline.

GM had a growth of 6.74% YoY primarily due to the improved sale of its 3-cylinder Diesel Beat. Shows how diesel can work wonders for a product! Etios range of products may not be liked by all and many believe it is not of Toyota standard, but numbers are surely depicting a different picture. Toyota grew over twofold to 15,948 units from 6,362 units in same month last year. 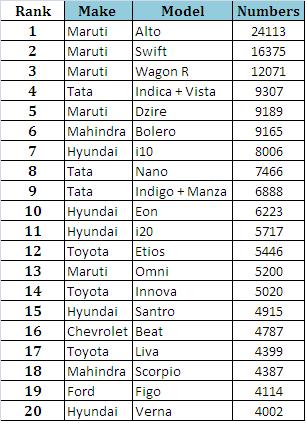 After the advent of the revolutionary Tata Ace in 2005, analysts believed the Indian 3 wheeler Industry would slowly be phased out and be replaced with efficient 4 wheelers.  Even Industry Experts were betting big on bringing more 4 wheeler cargo/passenger trucks into the market. The more powerful, stable, upmarket & value for money 4-wheeled offering was a real scare for the 3 wheeler industry. The market changed drastically and slowly the sale of 4W numbers was higher than 3W.  The industry also saw a steady decline in the year 2006 to 2008 as a resultant of aforementioned reasons. Suddenly the vehicle stability, long distance travel, interior space, higher payload, increased speed and car like comforts/driving were the value propositions sought by the Indian buyer.

As said and the done, the future was very different. The 3-wheelers suddenly emerged out of the grave and proved a valuable business proposition to the auto makers. The cognizance of the 3-wheelers was undeterred by the mighty 4-wheelers competitors. It grew manifold after 2008 and still is the first choice for the value conscious commercial vehicle seekers. The production almost touched 8 Lakh figures in F11 is the best example of its success story. So what is it that kept it alive???
Let’s start with a brief on the Indian 3 wheeler Industry:
The 3 wheeler market in India is over four decades old and is currently the largest 3 wheeler market in the world. Initially only 3 wheeled passenger autos were introduced. Later in eighties lower capacity cargo carriers were introduced – 0.5 Tons open body Pick-up van. Till late eighties, 3-Wheeler market was virtually ruled by Bajaj Auto Ltd. Late eighties – early nineties, new manufacturers developed higher capacity category by introducing 6 seaters & 0.75 Tons Cargo carrier. Late nineties saw a renewed interest in the 3-Wheeler market. Optimism about growing need of free mobility as well as the need for remote and efficient distribution of the goods and services was the key factors for the same.
The OEMs involved in manufacturing 3 wheelers – 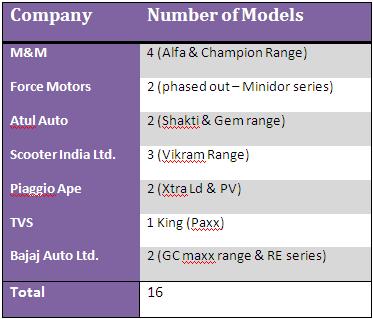 Slowly according to the market requirements LPG & CNG variants were also launched. The stringent government regulations also threw out the diesel variants from the city.
The Segmentation of the industry emerged as follows – 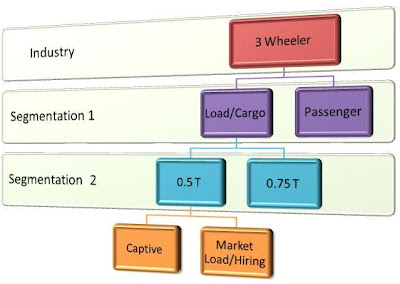 Key Drivers to the sustainability and growth were:
1. Last mile transportation needs –
Its small turning radius, ideal for intra city operations and easy to drive in narrow roads made it the favorite for small distance load/passenger carriers. Its maneuverablity allowed it to pass through even smallest lanes of the town. High product maneuverability & driveability had been always ideal for congested Indian roads and tropical conditions.
2. Inadequate urban & rural public transportation infrastructure.
Infrastructure remained the biggest concern. Unavailability of structured roads/highways didn’t allow the 4-wheeled machines to bloom. The 3-wheelers still proved to be the fastest and most viable alternative to the narrow, pot-holed Indian roads.
3. Low initial ownership/acquisition cost
It is still the most economical vehicle in the commercial  vehicle industry. Better mileage and Pickup Low maintenance cost along with amazing price and better load optimization made it the perfect choice! The low EMI’s stood as an attractive option and the easy availability of spares in the local market was another added advantage.

Various subsidies offered by the state governments encouraged the unemployed youth to openly accept this opportunity of owning it and make-a-living out of it.

Indian 3-wheeler market has seen its fair share of up and downs. Considering the exciting phases it has been through we had no doubt in calling it a ‘3-wheeled sprinter’ who has able to keep upto speed to the market requirements and has evolved to survive the dynamism/vulnerability of the Indian Automobile market. It’ll all exciting to track its growth/decline in times to come.

“Every cloud has a silver lining” – This is what the sales figures for the month of November 2011 has to say. Except Maruti all OEM’s have seen a considerable growth in its volume. Even Maruti Suzuki has exceeded the 80k figure after 6 long months! This is a sure shot sign of revival for the industry, and with the slight decrease in petrol price along with the huge year-end discounts we can expect the sales registers ringing this December.
1)
1. Nano 2012 is here!!! The increased numbers surely bought some hope among Nano enthusiasts. This brand still has a long way to go in terms to prove its potential.
2)     2. Beat grows over 80 percent than last year – this surely shows how GM was devoid of the market acceptance even after having a winner in hands. With the diesel version it has emerged as a savior to GM and enabled it to sustain its numbers.
3)     3. Eon with its slapstick pricing and futuristic looks has the potential to push Hyundai to the top position in India. But it is not easy to shake Alto’s dominance.
4)      4. Maruti has been able to revamp its supplies – evident from the offtake numbers of 17273 for Swift, 24422 for Alto and 10403 for Dzire. Estilo seems to be in its death phase, we think it is the right time to phase it out.
5)      5. Tata seems to be on Steroids. Both its Indica and Indigo brands are doing extremely well. This is primarily due to the performing Vista and Manza variants.
6)      6. Verna has taken the C-segment by storm. It has consistently proved itself as a rightful competitor over the last 6 months and has strengthened Hyundai’s position in C-segment.
7)      7. Bolero seems to exceed the magical 1Lakh figure this fiscal. It has already garnered 63314 numbers within 8 months of this financial year. Also Scorpio has shown a strong growth this year. With 4646 numbers it has grown over 38 percent over last year.
8)     8. Skoda’s Rapid did a decent start with 957 billings. We can expect it cannibalizing Vento’s sale to an extent.

1) Positive Signs in the month of November. Labour Unrest seems to be settling for Maruti – hope the sales completely revive in Dec’11.
2) Etios Brothers (Etios+Liva) has boosted the growth for TKM. Made for India Etios has got TKM to an enviable position.
3) Someone forgot to tell Mahindra about the Recession in the Auto space. M&M has an excellent growth of around 53%.
4) Tata Motors revive sales with the growth in Nano Sales. Also the new Indica Vista has boosted the numbers for TML.
5) Figo again emerges saviour for brand Ford – what a winner it has proved for Ford in India!
6) GM tastes the power of Diesel. Has a marginal growth (just 1%) – all thanks to the new Beat Diesel.
7) With more than 1600 bookings for Rapid, we expect a more RAPID growth in sales figure of Skoda in December’11.
8) VW’s Polo & Vento has grown to a sustainable position and are bringing increasing numbers to VW portfolio.