Skip to main content
While the Modi government is gung-ho on ‘Make in India’ strategy; Indian Automobile manufacturing has progressed to respectable levels already. Indian Automobile Industry currently accounts to 22% of country’s manufacturing GDP and is one of the biggest job creator in the subcontinent! India is poised to become the world’s third largest auto manufacturer in the world by 2020. As of today, India is largest three wheeler market in the world, second largest two-wheeler market and the fourth largest tractor market in the world!
India being a vast territory, we wanted to aggregate the state-wise locations of the manufacturing plants – hence, we have classified and collated the list for ease of understanding. The methodology for the same has been:
1. Vehicle Class has been given a priority – to enable clarity. For Ex: Even though Mahindra Trucks & XUV 500 are being manufctured in the same plant (Chakan, M’rashtra); we have taken the count twice for explicitly mentioning the class.
2. We have ranked the states depending on the count of class – Maharashtra ranks 1, TN at 2nd position, etc. However, the ranking maybe different based on vehicle production – it’ll discussed separately.
3. Manufacturer would be mentioned multiple times with the same location in the list – Do refer the class for better understanding. Also the same class may have multiple locations – Ex: M&M Tractors plants being present at Kandivili, Nagpur, Jaipur…

India is currently having an annual production capacity of 17.5 million vehicles and we have the manufacturing bases across the country for all range of vehicles. However, two hubs have grown to enormous size in past 2 decades – Chennai Auto Hub (TN) & Pune Auto Hub (M’rashtra). Chennai Auto Hub is rightfully touted as Detroit of Asia and is looking forward to become the largest auto hub in the world. It houses Hyundai, Ford, Renault, Volvo, Mitsubishi, Nissan, BMW, Hindustan Motors, Daimler, Caparo, Mini & Datsun. With these many auto manufacturers on-board Chennai auto hub accounts to 35% of revenue share and hefty 60% of India’s auto exports.

The Pune Hub houses auto majors such as Audi, VW, Skoda, GM, Tata Motors, M&M, Mercedes Benz, JLR, Fiat & Force Motors – contribue 33% of Market Share. Third in the list is NCR cluster – Maruti Suzuki being the biggie. Gujarat is growing steeply and already has Tata Motors (manufacturing the Nano), Ford, Maruti & Peugeot plants.
Such vast capacities from these units have made India an Export hub as well. OEM’s are strategically utilizing the capacity to cater to the Rural Demand and also International Markets depending on the volatility. This has further ensured that the OEM’s manufacture world-class products right here. Also the launch of newer models has been made faster. Do take a look at the manufacturing capacity of India’s top passenger car makers: 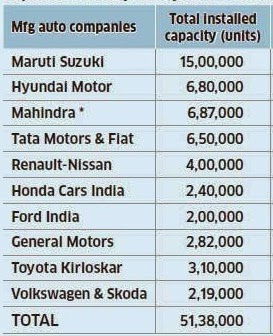